EOTech introduced the first-generation HWS (Holographic Weapon Sight) at the 1996 SHOT Show, under the trade name Bushnell-HoloSight®. The HWS was designed to increase target accuracy and speed of target acquisition in sport shooting and hunting applications. It won the Optic of the Year Award from the Shooting Industry Academy of Excellence.

USSOCOM awarded EOTech a contract in 2005. Special Operations and the Marine Corps chose the HWS as their standard close combat optic.

Let customers speak for us

I have a slight astigmatism and LED red dots always look smeared to me. I’ve found green helps and did on another purchase Holosun 510 green dot from extreme tactical. But I heard HWS may be better. This is a great sight and I have no smearing on the 1 MOA centre dot or 68MOA ring. The ring as with any other HWS looks ‘patchy’ when looked at directly, but clears up to a solid ring when concentrating on the target. Would recommend the sight and seller to anyone. Delivery was quick at approx a week. 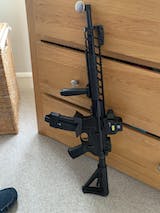 Was easy to fit and makes for a better shooting position

Had the bag now for just over a week, really pleased with it. Well made and designed, ticks all the boxes for what I need. Great service too.